Watch The Weasel Box Music Show on our YouTube channel- https://www.youtube.com/c/NeckbeardNoose -and check out new, obscure and unsigned artists. Send us a link - neckbeardnoose@gmail.com

Special Thanks to these artists for their support and love for The Weasel Box Music Show and our band:

Neckbeard Noose is an American heavy ambient musical duo from Dallas Texas that identifies itself as a metal band, specifically a sub-genre of metal coined "solipsynthm metal". Most instruments that are used are virtual with the exception of a few. Neckbeard Noose is Ddjroo (heavy vocals, didjeridoo, virtual instrument samples) and Richard D. Flowers (soft vocals, backing percussion, virtual instrument samples). Solipsynthm Metal - the fusion of dark ambient solipsynthm music and lofi heavy metal, also borrowing elements from other genres like nu-metal, experimental metal, witch house, electronica, avant garde rock and any other genre the artist chooses. Most instruments used to make solipsynthm metal are virtual and manipulated through DAW software, with the exception of only a few instruments (usually 2-3 real instruments plus all vocals). How the music is created, recorded and performed live is up to the artist's personal preference.

The first album by Neckbeard Noose, brainstormed and recorded during the first wave of the Covid19 pandemic. It contains 10 tracks and a stereogram image on the front; you must cross your eyes to see the 3D image.

Enter the amount you wish to donate 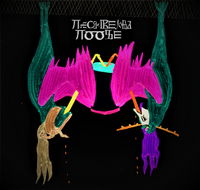 There are 72 different cards in the collection, each with its own power and battle numbers. Each demon was drawn by the band Neckbeard Noose based on what they can remember from their time spent in Hell. Many of the drawings are also overexaggerated to reflect the hatred the band still has toward some of the demons and their aggressive antics toward occupants of Hell.

RULES: 1 deck of 20/21 cards and 2 players (10 each); 3 players  (7 each)- Players take turns placing demons on the map to attack each other and count the acquired demon heads for victory. Pick any part of the map to place your demon or place it next to an opponent to attack them or stand in defense, the numbers on each side of each demon determine who wins each battle, ties result in a draw unless otherwise fought with special powers. The dead demon must be rotated with the name facing the player who defeated it, this means that player has taken one demon head, the most demon heads taken once the map is full determines the winner. Game Direction: 2/3 players each draw 7 cards from shuffled deck - you must place 1 demon down with it's name pointed away from everyone, use a color card underneath to easy remember which demons are yours, then the next player does the same - Draw a new card when hand is empty only.  If a demon dies and gets rotated, it's revival herb falls in the new direction- any dead demon next to the herb gets revived and returned to it's player's hand. Each demon has powers that revive dead demons, tie-break battles, manipulate battle-numbers or decks, etc (Refer to Magic Index).

--------------------
(white square)    = Guild - When a demon dies, it drops weapons/powers after its rotated, if a demon is in the direction of the rotated Guild icon, then all of their numbers are doubled- increasing their defense and attack power for ONE turn, use markers (G)to remember when this power is activated.

(black triangle)      = Golden Herb - Same as Revival Herb except enemy demons cannon use it when its dropped.

SORCERY POWERS: Powers can be used once by choice after demon is placed on the map, every demon has a Sorcery power in the bottom left corner. To remember when Sorcery Powers are activated on a card, use the small round markers.

----------------------
Clone - Two of the same demon can be used by you on the map at one time. This power must be activated by a different demon to be used again and returning the cloner demon back to hand cant undo this rule.

Matter Crunch - If you kill a demon, then all of your Class 2 demons's numbers are doubled, increasing their defense numbers for ONE turn. This power can be used repeatedly.

Necromancy - If you kill a demon, choose any demon on the map to revive them and rotate them to life, but the card cannot be returned to the owner's hand.

Teleport - If you kill a demon, then you may return any one of your living demons back to your hand.

Black Hole - Draw a card from the top of your deck to be used next turn.

Mini-black Hole - If you kill a demon, you may draw a card from the top of your deck to be used next turn.

Clairvoyance - Look at the top card of any player's deck and place it back.

Time Travel - Shuffle the top card of any player's deck anywhere into the deck.

DETAILED RULES: 1 demon placed on the map can attack any/all enemy demons around it by choice of order but once a battle is lost, the attacker must stop attacking and be rotated. 2 of the same demon cannot be used by one player on the map unless the Clone power is activated. Each player should use their own deck of 20 cards unless there is not enough. The game ends when all 16 places on the map are full, each player must keep placing demons down until this happens. You can only place one demon down at a time and you must place one demon down every turn. Any space on the map can be used to place a demon. The bigger number always wins. A 3rd or 2nd player does not have to use Owner Cards/ Placement Cards.